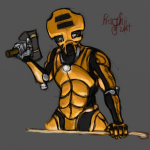 A writer and game designer, Kughii spends his days either fine tuning the mechanics of a board game, completing one of his numerous novels, or playing saxophone out the window to the chagrin of his jazz-dissing neighbors.

Retrieved from "https://bzprpg.fandom.com/wiki/User:Kughii?oldid=14892"
Community content is available under CC-BY-SA unless otherwise noted.