Orca: The Takea of Ga-Koro

Orca is a Ga-Matoran sailor who lost her memory and crashed on the shore of Ga-Wahi.

No Information is know when or how Orca came to be in a Diminished state. It is believed she was originally created this way. However it is just as likely that like most Matoran, she had a Metru form and was trapped in a Matoran sphere where her body was reduced and her memory erased.

While in her diminished state Orca's body is blue where her arms are more of a slate blue. Her feet and legs are a darker blue. Her mask is a black Powerless Great Kaukau.

Like most Matoran, Orca carried a Bamboo disk with her mask printed on the face. Orca owns a boat that she helped build. Some of the general tools she has on board are a pair of fishing rods and the usual sail one would expect on a boat captained by a Ga-Matoran.

Much like when she became a diminished Matoran, Orca has no memory of when or how she was rebuilt into her current state. Usually the transformation happens when a Matoran reaches a certain feat or does something noteworthy. Either may be the case or neither could. What is knows is that when she was rebuilt Orca's body and armor took on a darker tone of blue than her diminished state had. One could view it as an Ocean or Royal blue in tint. Her legs and feet take on a much darker midnight tone of blue right along with her hands and Mask. Though her Mask in certain lights or lack there of, becomes so dark it appears almost black.

Orca still has her boat, or rather what is left of it after it crashed along the shoreline of Ga-Wahi. It is in need of repairs and she has taken up an archaeology job to help pay for the repairs it will need. She has upgraded her tools from a simple Bamboo disk to a bamboo pole and a Kolhii stick with a fishing attachment. Not much but she seems to get by with it.

Pre 2015: Unknown due to not being part of the active story.

January 25 2015: Orca Arrived back on Mata Nui from an unknown location via her Boat. Though it was not the arrival she would have chosen. It appeared as though Orca had crashed her boat. A rare occurrence to be sure. Orca was a great sailor and even a Corporal in the Ga-Koro Marines. Though due to the accident that caused her to crash also haven possibly taken her memory. Orca does not remember anything of her life prior to waking up in the surf.

Orca and her boat washed up on the shore of Ga-wahi East of Ga-Koro at the mouth of Naho Bay. Orca awoke groggy and missing her mask. She was lucky it was bobbing in the surf near here and within arms reach. Grabbing the mask from the surf and placing it securely on her face caused her strength and natural Ga-matoran colors to return to normal. Though her memory of what happened or how she got there had not. Shaken from her ordeal Orca's one goal was to find someone who could tell her who she was. Retrieving her pack and some items from the cracked hull, Orca tied off the boat so it wouldn't be taken out to sea and proceeded west...

After a long trek along the shore Orca had finally seen the telltale signs of Ga-Koro over the Horizon. By this time she had been so tired from walking that she was using her bamboo pole to support herself as she walked with a purpose ever closer toward the village of Ga-Koro. She was under the impression that somewhere in this village somebody would be able to fill in the gaps of her memory.

When she finally arrived a lot of commotion was going on, though most of it didn't involve her yet. As she walked around Ga-Koro she noticed a congregation of individuals converging on a large boat off a Northern Dock.[1] This seemed to be the place to be as when she approached she noticed another Ga-Matoran whom she would know as Aokora later speaking with a larger Toa named Red. Orca was unable to flag these two down as they seemed to be in a bit of a hurry. It wasn't until a Fe-Toa named Jalkron over heard her cries that her presence was noticed by archaeologist in charge.

There was some question as to whether or not Orca intended to be apart of the expedition or not. Both by Orca herself and The two Jalkron and Aokora whom had a short discussion on the matter before letting the wayward Ga-Matoran onboard their vessel. 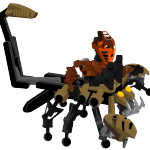