Encyclopaedia of the BZPRPG Wiki
Register
Don't have an account?
Sign In
Advertisement
in: Skakdi, Characters, Fa-Skakdi, Evil

"The Akiri don't care about their citizens anymore than the Turaga did. They only care about the power they enjoy. And that's why I'm going to do something about it. I'm going to make your little society crumble, and that's just the first step."
— Onoraza to a Matoran

Onoraza is a female Skakdi who used to hold a deep grudge against all Matoran.

For an unknown reason, Onoraza spent a long time in the most infamous prison of Onu-Koro, where she was maltreated by the Onu-Matoran guards. She was eventually released, but she had developed a deep hatred towards all Matoran. She found herself a secret cavern within some of the abandoned tunnels of Onu-Wahi and began to use it as a hideout.

When Ko-Koro was attacked by Echelon's forces, Onoraza was near the village simply on a scouting trip of her own. She was pleased to witness a battle and immediately joined it, starting to fight against all Matoran and their allies. She ended up in a fight with the Toa of Ice named Dahkapa. The two battled for a long while before a Fe-Matoran named Londar interfered. Although Onoraza dealt heavy damage to her foes, she was eventually too weak to battle and retreated.

Upon returning to her cavern, Onoraza encountered Kavala, who had taken the kidnapped Matoran Kirgan there to tie him up. Although enraged at first, Onoraza agreed to a pact with Kavala. Kavala left for Onu-Koro, while Onoraza agreed to stay and guard Kirgan.

She kept taunting the Matoran, until Khervos and Vesun entered the cave to save Kirgan. At that moment, Kavala ambushed the group and betrayed Onoraza by sealing everyone inside the cavern. Frustrated, Onoraza was forced to make a truce with her enemies in order to get out.

The group broke out of the sealed cave and Onoraza led them back to Onu-Koro. There, they found Kavala quickly and subdued him. After Kavala was down, Onoraza voluntarily retreated back into her cavern to wait for another day to get her revenge on the Matoran.

Having heard of a wealthy Onu-Matoran mogul, Onoraza invaded Niralle's estate with plans to kill the Matoran. She found Niralle and killed his advisor, but Niralle managed to convince Onoraza to spare him and instead form a business alliance. Niralle would offer his assets at Onoraza's disposal in exchange for her killing his rivals. Onoraza accepted the offer and was taken to Niralle's armory, where the Skakdi used the plentiful mechanical components and armor to rebuild herself in a new form.

Soon after, she was sent by Niralle to assassinate an Onu-Matoran prospector in order to create chaos in the Great Mine. Onoraza successfully complete her task and returned to Niralle, who assigned her to kill Sajis, a Fa-Matoran guardswoman.

Onoraza quickly located Sajis in the middle of a situation that involved Lash and her enslaved Rahkshi. Intrigued, Onoraza followed as Lash was taken inside a secluded workshop building, under guard. She paid a Matoran to deliver a message to her, telling to meet her outside the building. However, instead of Lash, it was Reson who showed up and demanded an explanation. Onoraza dismissed her after a short talk and continued on her way.

Deciding that she needed to get closer to her victim in order to gain her trust, Onoraza went to the Ussalry headquarters to try and apply for a position in the Ussalry. Due to her not being registered as an Onu-Koro citizen, she couldn't become a guard, but was given the opportunity to enter a consultant job instead. Accepting this, Onoraza began pondering about her reason for hatred against Matoran and started having doubts.

Eventually, in her new job in the Ussalry, she grew to like her new role and decided to abandon her plans of killing Matoran, starting to work alongside them.

Onoraza used to hate all Matoran. This hatred made her acitons crude and uncalculated. She believed she could make a change through coercion and threat and wished to destroy the Matoran civilization. At the same time she was smart enough to realize she couldn't kill all Matoran and therefore resorted to kidnapping and threats to achieve her ends. However, she has since had a change of heart and now works alongside Matoran in the Ussalry, albeit sometimes a bit awkwardly.

She used to be much shorter than the usual Skakdi, while possessing more armor, making her look akward and bulky. However, since rebulding her form, Onoraza has become taller and leaner. Even though she is a female, her voice is surprisingly deep and gruffy. In her old form she was often considered unattractive even by Skakdi standards, but she went through great effort to change this during her rebuilding. As a result, she looks decent for a Skakdi.

Onoraza's element is magnetism. She can use this power only in conjunction with another Skakdi. Her sophoric vision causes fatigue in the target and prolonged exposure will cause actual sleep.

Onoraza used to carry with her what she called the "Granite Sword". The handle of the sword had granite engravings on it, earning the weapon its name. The sword was heavy and sharp, used by Onoraza mainly for ambush attacks.

After meeting Niralle, Onoraza discarded her Granite Sword in favor of a new, lighter and longer sword with an even sharper edge. She is not an expert at using it yet, but can deliver quick and dangerous blows.

Onoraza owns a Zamor launcher with Zamors containing small amounts of elemental plantlife power. When the sphere hits its target, it unleashes the energy and creates vines to wrap around the target. The vines are strong enough to fully incapacitate a Matoran, but any stronger being can tear free, albeit with some difficulty.

"You know, it's funny how Matoran and especially Toa always think they are doing the right thing. As if being the most populous species on this island gives them the right to do whatever they want."
— Onoraza to Dahkapa 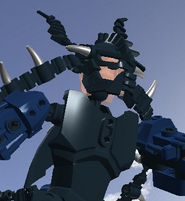 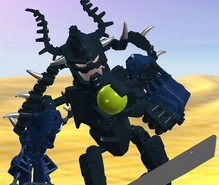 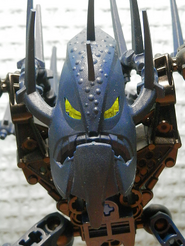 Bust of the old form of Onoraza.