Kongu is the Akiri of Le-Koro.

Kongu takes his duty seriously, but remains more easy-going than the other Akiri. He is a skilled bird-wrangler and knows much about flying Gukko birds. 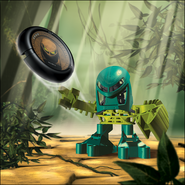 Kongu piloting a Gukko bird.
Add a photo to this gallery
Retrieved from "https://bzprpg.fandom.com/wiki/Kongu?oldid=15547"
Community content is available under CC-BY-SA unless otherwise noted.