Encyclopaedia of the BZPRPG Wiki
Register
Don't have an account?
Sign In
Advertisement
in: Characters, Matoran, Po-Matoran,
and 8 more

Doseki is a Matoran of Stone that resides on the Island of Mata Nui in the Village of Po-Koro. Most of the time however he is off on some cliff-face dangling by a rope or traveling with his Rahi mount Scorpio.

Doseki was created as a Po-Matoran and as such was raised in the land of Po-Wahi and the Po-Koro village. There he grew and learned the Principle of Creation and became a crafter. Not being satisfied with just working with stone as abundant as it was in Po-Wahi, Doseki chose to expand his craft further and adapted wood as well as other elements such as Solid Protodermis and going as far to even try working with Protosteel into his work. This skill would later come in quite in handy, though he didn't realize it at the time.

One day when Doseki was still young he took a trip to Ga-Wahi and the Ga-Koro Village. This visit was the first and last time Doseki set foot in the Land of water. During his visit he was pushed off the ledge of the village into the water where he abruptly sank like... well... a stone. The last thing he remembered before waking up back in Po-Koro was the shadow of Ga-koro quickly floating out of reach. To this day Doseki refuses to even set foot in Ga-wahi or near any body of water. He even stays as clear of Leva Bay even though it is a valuable port between Po-Wahi and Ga-Koro. "The last time I was there it almost ended me." He declares with utmost resolve.

Doseki like all Po-Matoran, as well as Matoran in general, started out his creation with the larger Metru Nui form. However due to circumstances beyond his control he was sealed in a Matoran pod and was transformed into a diminished state. Doseki's diminished state has black feet and a brown body and arms. His Mask is the Great Pakari mask of strength though appears to be powerless. Like many Po-Matoran, Doseki's mask is brown, though he choose a deeper darker shade than the normal orange appearing color of the most common Po-Matoran. When he was Young on Mata Nui he remained in this diminished state until he became a member of the Po-Koro Guard.

While in his diminished state Doseki did not have access to as many tools as he does later due to crafting them himself. He did have his Kolhii Stick so he could play the game in his time off as well as a bamboo disk for general defense and offensive needs.

When Doseki joined up with the Po-Koro Guard he was upgraded from the diminished stature to a rebuilt one. His body & arms are still brown though the shade is darker than his prior form. Now having separate hands they are an black shade of onyx along with his feet and legs. His Great Pakari Mask of strength has changed over the many years and has now become two-toned with the original brown color changing to a rusted color halfway down the mask's face.

Over the years Doseki has crafted several weapons and tools he now uses. The most recognizable is his Kolhii Stick as its use is well known among the inhabitants of Mata Nui for playing the game of Kohlii. Doseki has used his Kolhii Stick for both recreation as well as defense. Doseki will store his Kolhii Stick along his back when it is not in use along with a set of climbing claws. Doseki crafted himself a pair of Claws as well as rope and other assorted climbing gear for use with climbing the mountain and cliffs of Mata nui. A pastime he enjoys greatly when not defending the inhabitants of Mata Nui, crafting for other villagers, or playing Kolhii.

Doseki has upgraded his old Bamboo disk to two Kanoka ones as well as a Disk launcher to fire them. The two disks hold the codes 337 and 347 respectively. The first disk coded 337 signifies that it is a Po-Kanoka disk with a power level of 7 for the ability to Weaken the target. The second disk coded 347 was also a Po-Kanoka disk with a power level of 7 only this time it has the remove poison ability. Doseki crafted the second disk after he had tamed a Nui-Jaga as they were well known for their poison. Should something happen and his Pet got out or injured someone Doseki wanted to have a cure all.

While not so much a tool as gear for his Nui-Jaga; Doseki also has a set of harnesses and restraints he crafted to allow himself to ride the Great Scorpion comfortably without having to worry about it attacking or injuring himself or a harmless bystander on their travels. The harness and saddle go around the Nui-Jaga's belly and over its back. Doseki sits about halfway between the Nui-Jaga's head and the base of the tail. Doseki has restraints on both the claws and the tail of his Nui-Jaga to keep them from mortally wounding someone without provocation. While the Nui-Jaga is unable to sting a target with its tail

Like all Po-Matoran Doseki has innate Stone power that manifest itself in the form of increased physical strength; Though not on a level of a Toa or wearer of a powered Great or Noble Pakari. With his increased strength Doseki is capable of lifting and carrying objects multiple times his size and weight. This genetic increase in strength is what Doseki uses in his crafting profession as well as when he has to take-up arms against enemies.

Doseki is a Po-Matoran and as such follows under the Principle of Creation and the skill of Strategy. It is because of this Principle that Doseki has taken up crafting of tools and weapons in his spare time. When he is not defending his home of Po-Koro & Mata Nui as a whole; or scaling the rock faces of Mata Nui's mountain ranges. Most of the gear and weapons Doseki uses were personally crafted by himself. While he is not above allowing somebody else to craft something for him, Doseki prefers to use his own personally crafted gear so he knows they work as intended. Not being satisfied with working only with the stone of Po-Wahi Doseki has expanded his crafting prowess to other materials such as wood and several other elements of Protodermis.

Doseki is a master rock climber. He has been climbing cliffs since he was young and awoke on Mata Nui. If there is a peak or cliff on Mata Nui Doseki has most likely climbed its surface and came out on top. If he hasn't then it is quickly added to his active to-do list.

As with many Po-Matoran Doseki has trained in the Kolhii skill of Strategy. In doing so he is now capable of thinking ahead and predicting his opponent's moves while also subtlety manipulating them to give him a possible advantage both on and off the Kolhii field. It was because of this skill that Doseki was asked to join the Po-Koro guard where he could put it to a more military use.

Doseki is the only known Master of a Nui-Jaga. He found it in the wilds of Po-Wahi when it was still small during a mission after becoming a member of the Po-Koro Guard. Doseki managed to tame the Nui-Jaga and now rides it everywhere he goes and keeps it at his home in Po-Koro. Doseki and the Nui-Jaga whom he has named Scorpio are very protective of each other. Doseki will not hesitate to become hostile to anyone who would speak ill of it or wish it harm.

Pre 2015: Unknown due to not being part of the active story.

February 14 2015: Doseki Arrives in Ta-Koro via the Mangai Volcano on that back of Scorpio his Nui-Jaga he had tamed years ago while on a mission for the Po-Koro Guard. He was met with a slight delay however managed to safely enter into Ta-Koro where his choice of mounts was quickly noticed by the local villagers and a Vo-Matoran named Fulmen.

Doseki had intended to just enter the Koro to stock up on supplies while also maybe getting some of his gear repaired. After a short conversation with the new Vo-Matoran Fulmen; and an extended stay working in a local forge within Ta-Koro; Doseki managed to repair his tools. He then accepted a quest from his new acquaintance to escort him through the Jungles of Le-Wahi and onto Le-Koro to purchase some healing herbs sold there.

Doseki's Rebuilt Matoran form. This is the form he has within the BZPRP.

Doseki with several tools equiped including his climbing claws; Kolhii Stick; and a Bamboo Disk.

Doseki as he would have appeared on Metru Nui before being sealed in a Matoran sphire. 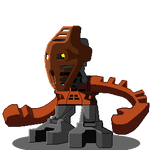 Doseki in his diminished form. He has this form Pre-RP and took his rebuilt form upon becomeing a member of the Po-Koro Guard.