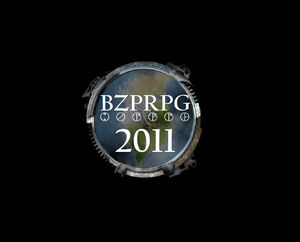 The BZPRPG (BZPower Roleplaying Game) is the official Bionicle RPG of BZPower. This Wiki chronicles the characters, events, locations and more that appear in the rich and complex world of the RPG's third incarnation - known by some as "BZPIII".

Set on the lush island paradise of Mata Nui - yet a troubled paradise, for Makuta's grip on the island is strong - in a world where the Toa Mata never emerged from Mangaia, the players' characters must solve the mystery of the Toa's disappearance, and Takua's; or, indeed, try to stop this happening. The sandbox mood of the RPG also allows a third option - live your own life, regardless of the island's power struggle.

"BZPIII" began in October 2011, after one of the longest downtimes in BZPower's history. The original BZPRPG had been rebooted in January of that year, but the "NBZP" only ran for a few months before being struck by downtime. The game staff decided that it could not be salvaged, so it was rebooted for a second time, following much the same setting but with a few tweaks (most notably the removal of Xa-Kuta magic).

The main storyline barely progressed during November 2011, due to the combined absence of Friar Tuck and Emzee, the latter of which returned at the beginning of December.

At the beginning of the year, Friar Tuck posted this introduction:

In the time before time, the Great Spirit descended from the heavens, carrying we, the ones called Matoran, to this island paradise. We were separate and without purpose, so the Great Spirit blessed us with three virtues: unity, duty, and destiny. We embraced these gifts and, in gratitude, we named our island home Mata-Nui, after the Great Spirit himself.

But our happiness was not to last. Mata-Nui's brother, Makuta, was jealous of these honors and betrayed him. Makuta cast a spell over Mata-Nui, who fell into a deep slumber. Makuta's power dominated the land, as fields withered away, sunlight grew cold, and ancient values were forgotten.

Still, all hope was not lost. Legends told of six mighty heroes, the Toa, who would arrive to save Mata-Nui. Time would reveal that these were not simply myths – for the Toa did appear on the shores of the island. They arrived with no memory, no knowledge of one another – but they pledged to defend Mata-Nui and its people against the darkness. Tahu, Toa of Fire. Onua, Toa of Earth. Gali, Toa of Water. Lewa, Toa of Air. Pohatu, Toa of Stone. And Kopaka, Toa of Ice. Great warriors with great power, drawn from the very elements themselves. Together, they were six heros with one destiny: to defeat Makuta and save Mata-Nui. These heroes were infallible.

Or so we thought.

As was their destiny, when all the masks of power were found, and their powers perfected, they descended into the Makuta's lair to confront the Master of Shadows himself, to free the Matoran of his power and awaken Mata-Nui. They disappeared into the temple of Kini-Nui… and never returned. Somehow, even the combined powers of the six Toa were not enough to defeat him. Makuta was too strong. After the Toa's disappearance, there was nothing to prevent the Master of Shadow from taking back the island; the Makuta was free to unleash his shadows once more. And unleash them…

The land and beasts were once again his. The rahi of the island, from the flying Nui-Rama to the crawling Mana were enslaved to Makuta's will by infected masks. But Makuta awakened even darker things to serve his will, as well. Terrifying and demonic creatures known as Rahkshi, spawn of the Master of Shadows himself, appeared, possessing the same qualities and powers of their creator - including his characteristic lack of mercy.

This was over a hundred years ago.

The Matoran of Mata Nui live still in fear. Many Toa have since come into being; the ailing Great Spirit has created hero after hero, but none so far have had the power or the strength of will to topple Makuta. Foreign races have washed up on the shores of the island, none able to remember from where they came. Only the fragile trust between the Koros has been enough to stave off Makuta's forces... but Unity is a virtue that is steadily losing its vitality. Duty is a dull pain that too many live under.

The virtue of Destiny, however, has not run its full course. There is a new prophesy in the stars, one that brings hope to the Matoran: the rise of a new set of heroes, ones that will defeat the mighty Makuta, and save Mata-Nui. This is difficult to believe however as the Master of Shadow's hold on the island is nearly complete, his forces growing in number and force by the day.

This is where my tale ends, ours meet, and yours starts, Adventurer. Who will you be? Are you a hero, a foretold one has come to fulfill the original six's destiny? Or are you a servant of the Makuta, working to make his hold complete?

Your actions will reveal all.

Probably the biggest change compared to the NBZP, Friar Tuck stated the reason for the removal of Xa-Kuta as follows: "It was too advanced for Mata Nui. The technology, social structuring, and urban/futuristic attitudes that the existence of Xa-Kuta fostered were bad for the spirit of the island of Mata Nui. We wanted to recreate the innocence, the simplicity, and the charm of the first years of BIONICLE. Xa-Kuta was doing the very opposite. As such, it is gone. It never happened - Xa-Kuta was never a part of the story."

The BZIII was created to become a more Sandbox style of play, as Friar Tuck stated: "Staff will be loosening up the gameplay a bit. I have been working with Nuju an my other staff to direct the BZPRPG to more of a sandbox-type game in which you can do whatever you want with your character. So if you want to be a detective, financial guru, sword-for-hire, create your own organization, or anything else, I'm not going to shoot it down. Everything is negotiable as long and its reasonable, you work at it, and realize a bunch of stuff might happen before it becomes a reality. There WILL be an official background story, but that's just it: background. Its what keeps this island fresh and time moving on, and chances are just like in real life most of you will not be able to affect it... though if you're lucky enough or just good enough or in the right place and the right time meh, it can happen."

The BZIII also modified how things worked with characters played by Staff; once more, Friar Tuck explains: "The other big announcement(s) is how I am going to handle the game form now on. First, some changes in how staff plays characters. All staff are still allowed to play personal characters; however, personal characters have NO PERKS; they are no more special than other PC's. They must follow the same rules as everyone else. If my staff wants to play just to have fun, then that's all they're doing. Treat staff personal characters as you would any other character.

To balance this, though, staff will also control "BZPRPG Canon" characters that may or may not resemble personal characters; the purpose of these characters is to either help or hinder the players in the course of the game. They can have their own storylines and interests and dreams, but their first priority will be to the game and to the players. BZPRPG Canon characters may seem like regular PCs, but they most certainly are not. These guys will probably be at a much higher power level than everyone else, and will probably be able to kick-butt at will... but they are here to move the game along, help/hinder the players.

A Different Style of Play[]

"Ok, so we all know that this is a sandbox-style RPG, where most of heroes, villains, and events are player-driven with Staff oversight to make sure the rules are followed and everyone plays fair. This is due to the overwhelming requests over the years, so knock yourselves out. There is however a significant portion of you who want to have some sort of over-arching canon-like story, something to drive this game in a certain direction and who want to be involved in THAT kind of RPing.

I will give you several warning ahead of time: it will not be easy. A lot will require digging, both in-game AND research out-of-game in regards to canon to figure out; I will give only the bare minimum of requirements, nothing more. You guys want to figure out Makuta's game plan? Well, you're going to have to earn it. This is where the Staff Quests come in: they are the best way (but NOT guaranteed) to either get a major push, clue, or item that will help unravel this mystery. And in the rar-aherrm, I mean quite possible case of someone figuring it all out, it needs be be done in sequence...

Which means it will take a while. Oh yeah, one other thing - if you choose to do this "second-option" RPing instead of the massive free-for-all, there is another condition that will apply. Some of you-

If you decide to pursue this option, you need to know going in your character may not come out alive. For every adventure there is a risk, and that is one of many things that might befall your character. The rewards however are well worth the risk, trust me."